This week's assignment is to characterize a laser-cutter (in-group); to cut something with the vinyl-cutter (individual); to design and to laser-cut a parametric construction kit (individual).

* All DXF and original editable files can be downloaded here.

* This week's group assignment is to test the proper power, speed, frequency and kerf values of different materials using a laser-cutter. In order to explore possible materials for my Final Project, I also conducted a personal joint clearance and kerf bending test with living hinges.

* Besides, we are required to individually design and cut something with the vinyl-cutter and to laser-cut a parametric construction kit that can be assembled in multiple ways.

I used the Roland CAMM-1 Servo GX-24 to cut a sticker of the logo which was designed in the previous assignment. The detailed specs of the machine: 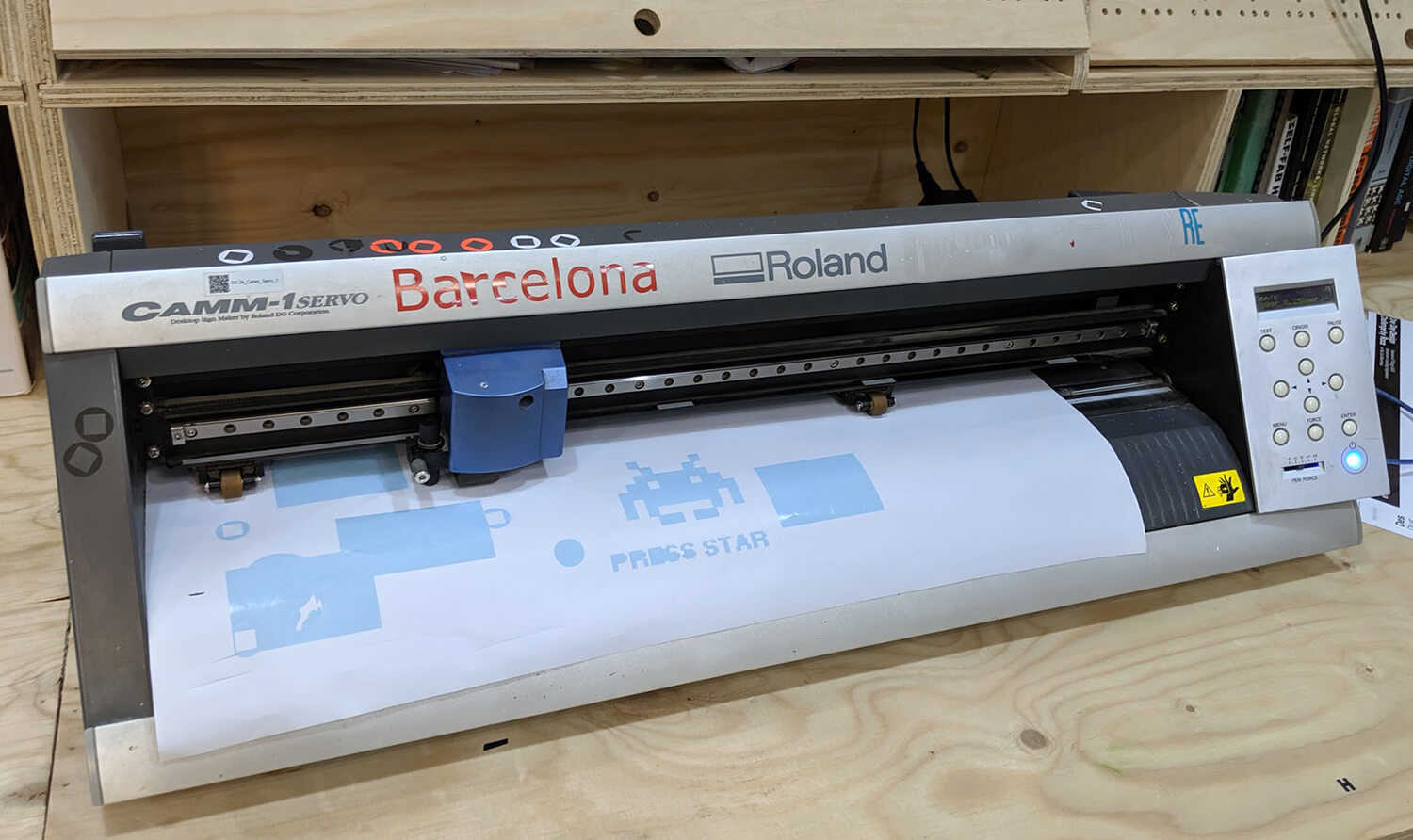 Some essential steps to use the vinyl-cutter:

After having my logo cut, I used masking tape to get the parts I want out and put it on my laptop. 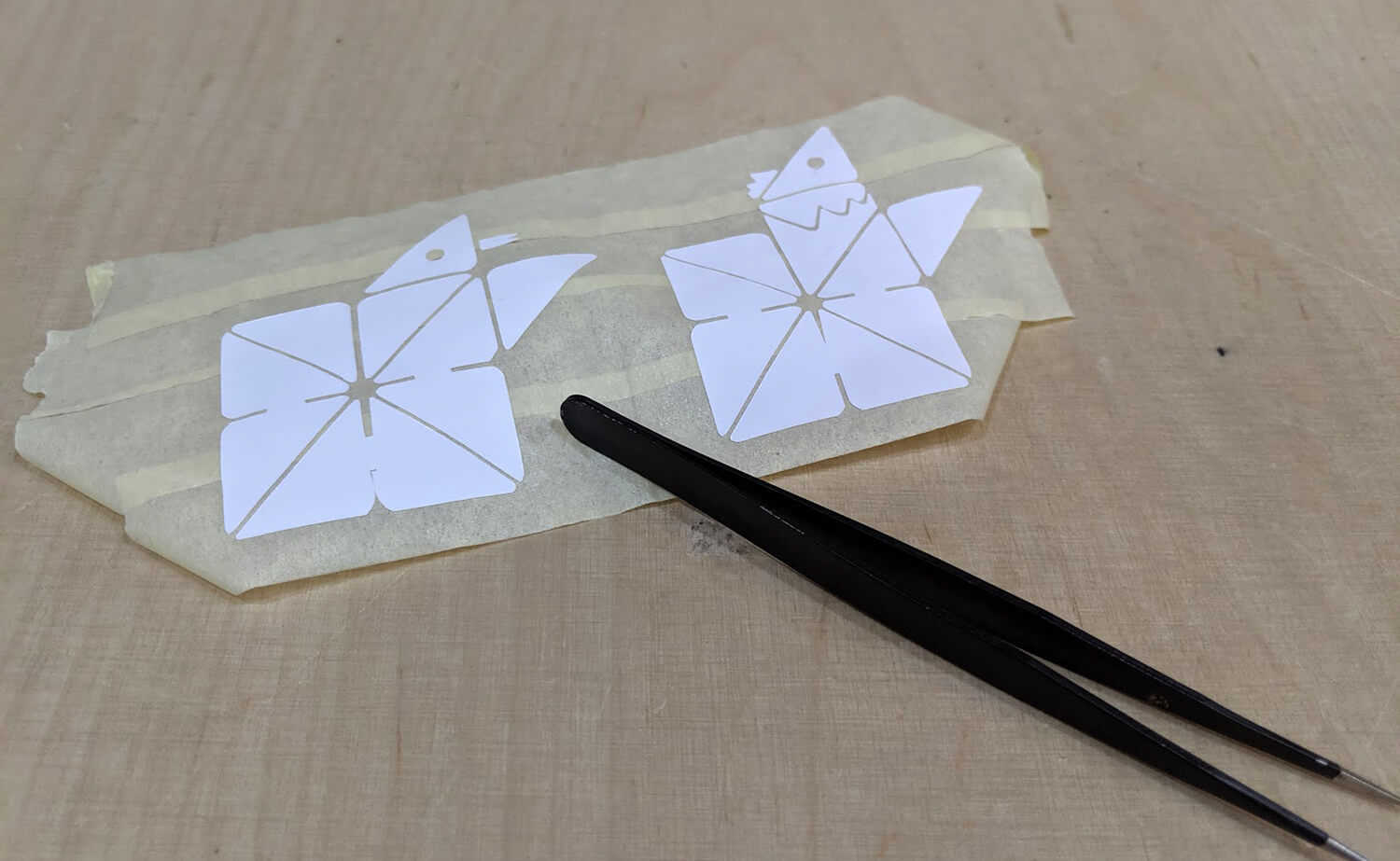 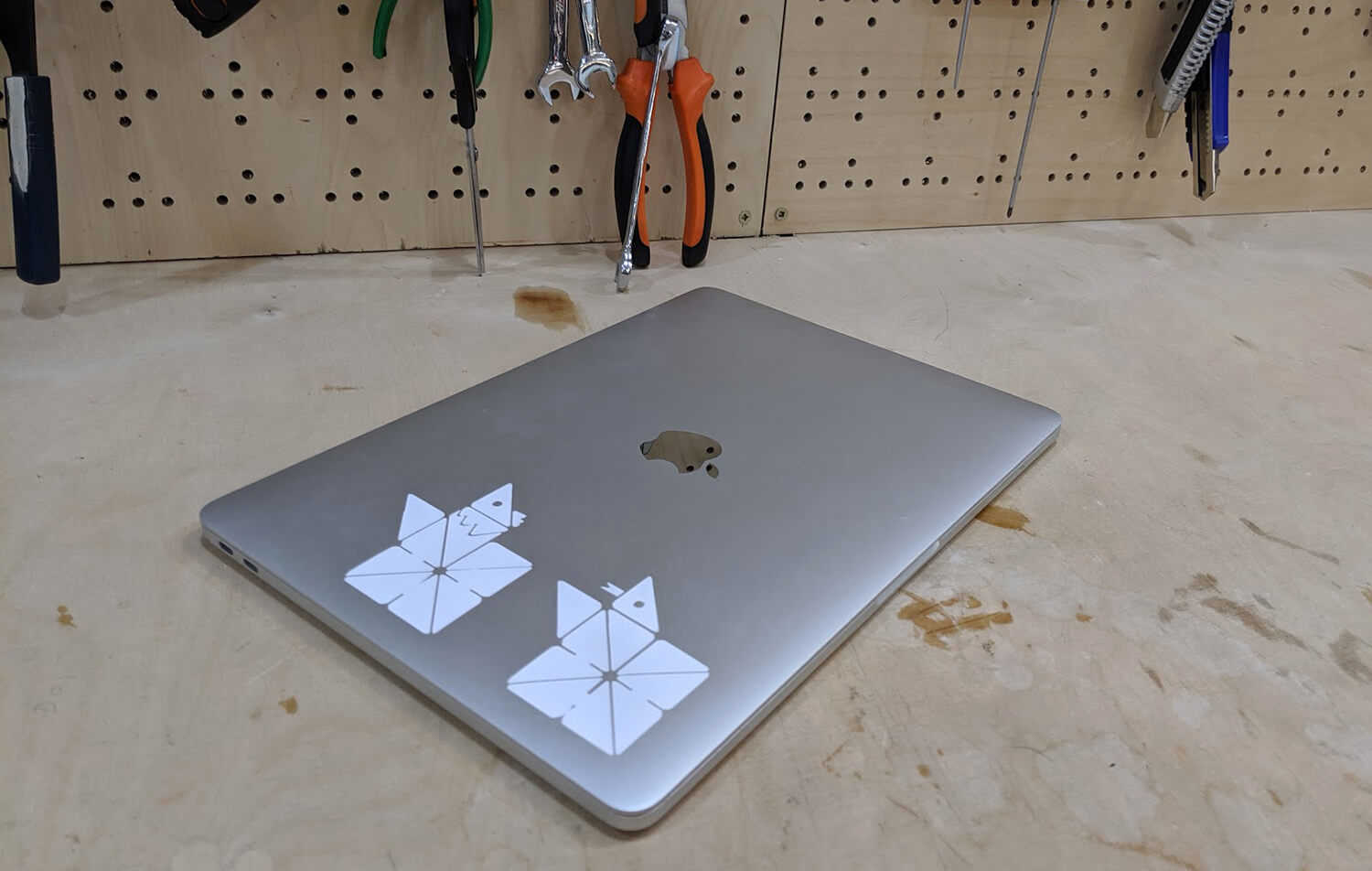 Our class decided to split the group based on who could come to the lab on Friday or Monday. For the Friday group, we tried to cut many pieces of different materials so each of us could go through the process once. I've worked with these classmates during my session: Arman Naraji, David Prieto, Antoine Jaunard, and Benjamin Scott.

We used this test file provided by the instructors to test the laser cutter Trotec Speedy 100 with different materials. The detailed specs of the machine: 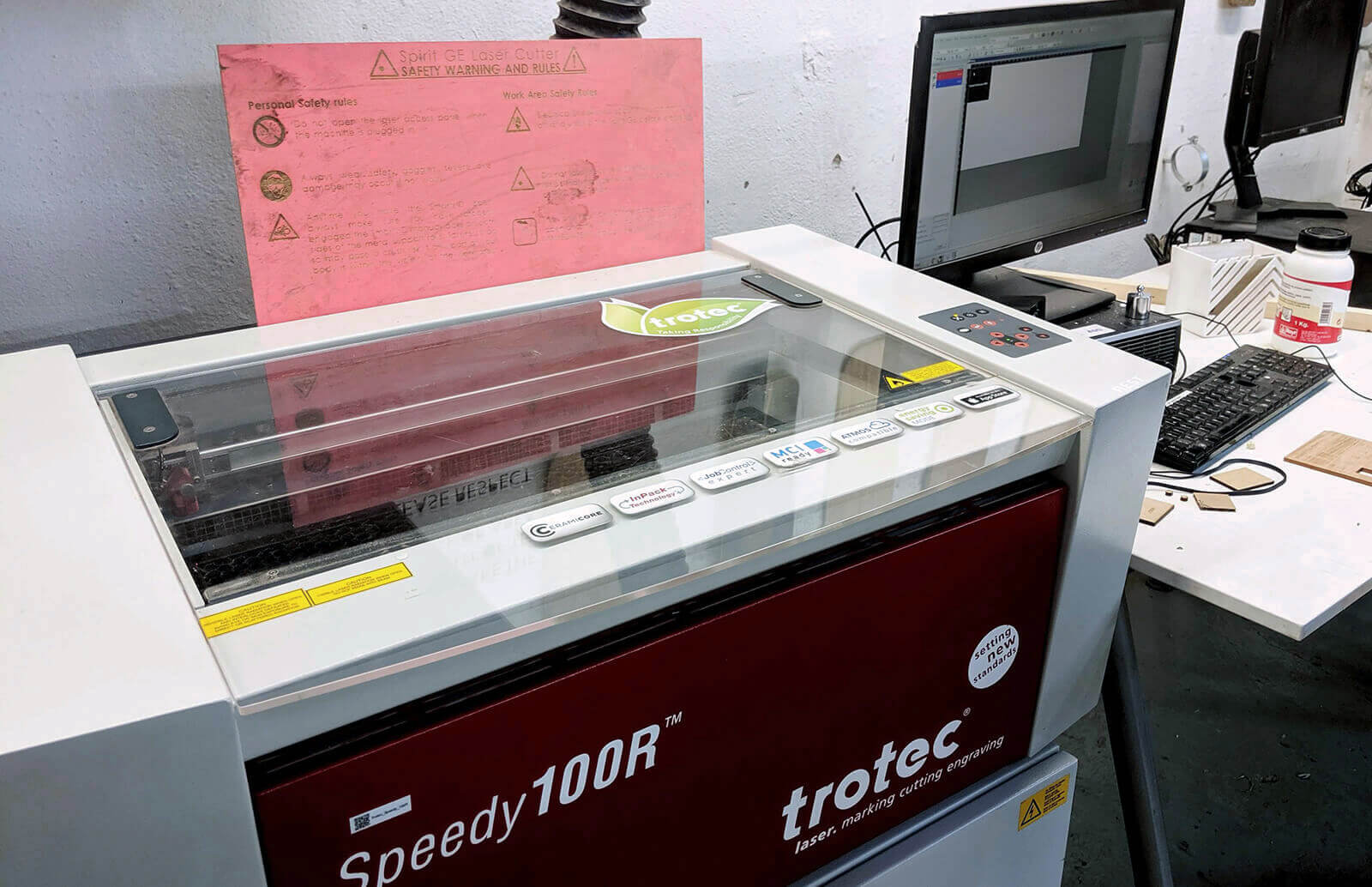 We chose to proceed with cardboard 4mm and plywood 4mm because we could find nice leftovers of those materials. I've personally learned from Santi that flexible plywood is not a good material for cutting.

The controller of TROTEC laser-cutters, TROTEC JobControl, calls the processes slightly different from us: the raster engraving process is called Engrave, the vector engraving process is the Cut one with way faster speed, and the vector cutting process is still called Cut. For the Material Settings in JobControl, we followed the information on the samples at the Fab Lab. The parts to be raster-engraved were color-coded with black, and the parts to be vector-cut were color-coded with red.

The settings we used for cardboard 4mm:

Below is the result of the first test. The power seemed to be over-increased, hence the cardboard was burned while being raster-engraved: 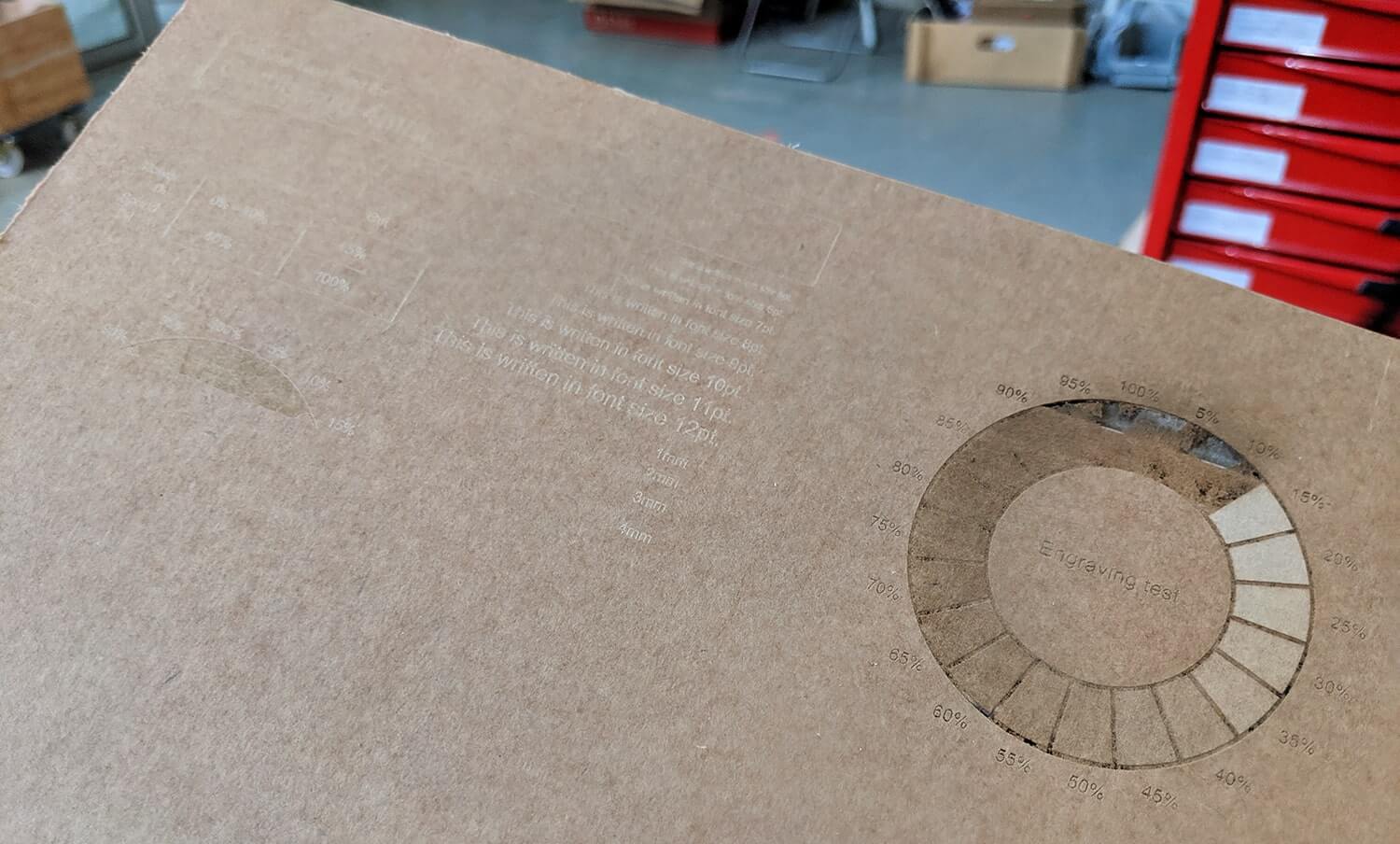 The process was totally enjoyable:

However, the plywood was not cut through, and we had to both reduce the speed and increase the power: speed=0.8, power=80, PPI/Hz=1000. We executed the job once again, so the cut was a bit messy. The outcome is not perfect, but it's fine.

The result of the second test: 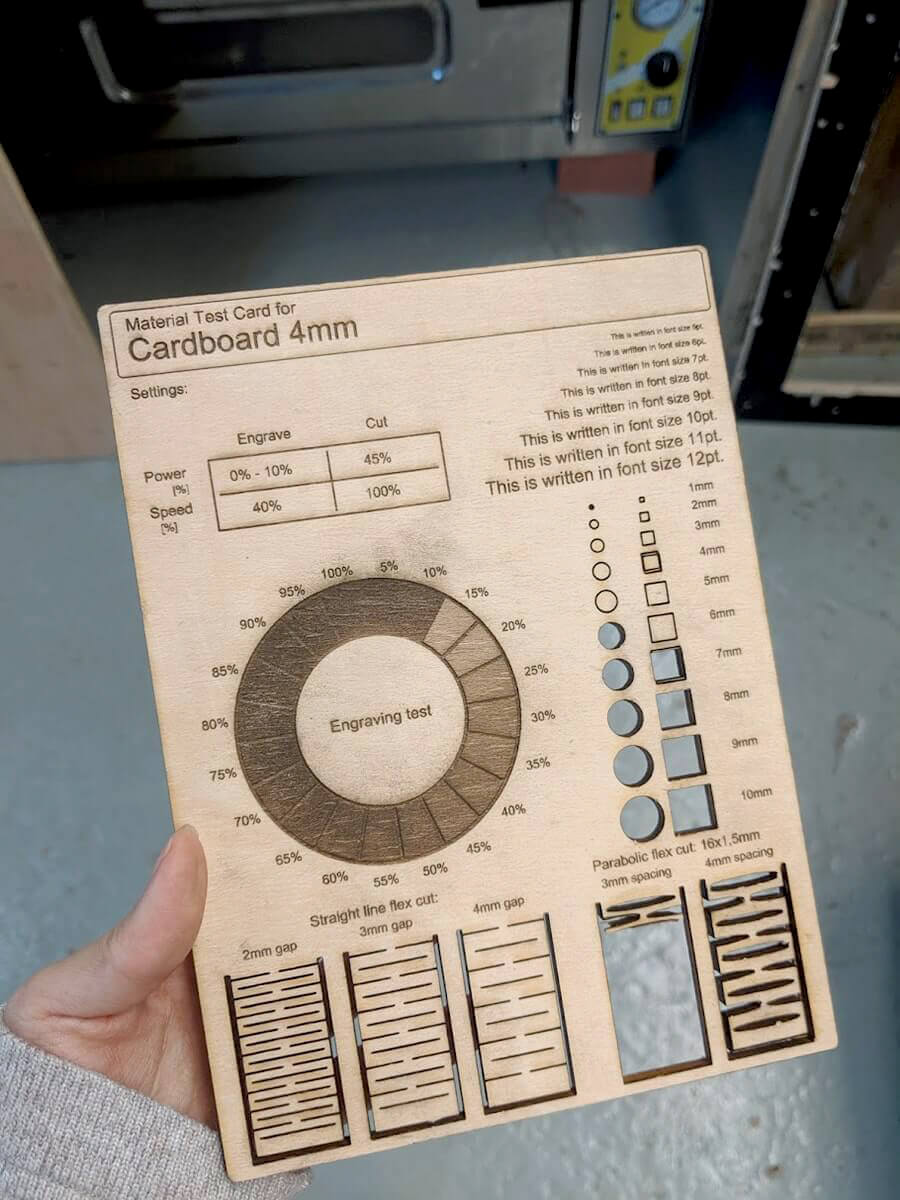 What I personally learned

The very first thing I learned this week was time management. Staying in the queue for using the machines can be a disappointing waste of time if we don't know what to prepare and how to organize what to do. At the end of the week, I could only proceed with a press-fit design that meets the minimum requirements of the assignment, and I was still left with the desire to try out more design techniques (waffle, bending or stacking).

I find that pre-calculating the possibilities with which the pieces will be assembled will inadvertently limit those possibilities to what I can imagine, thereby reducing both the flexibility of the design and the creativity of ones who will actually use it. Therefore, instead of following the usual "unfolding" process, I switched my approach to simply defining a certain rule for the pieces of the construction kit.

The most important requirement for this week's assignment is that our design must be parametric. Parametric design is basically designing based on defined parameters, and by changing those parameters we can quickly adjust our design. After consulting some images online with the keyword "cardboard parametric design" as well as observing some of the previous year's models available at the Fab Lab, I decided to create a series of isosceles polygons, starting from triangles, squares, pentagons, and ending with hexagons. There would be different sizes for these polygons as well. After cutting and testing, I would add other supporting pieces, if necessary. With this in mind, it was obvious to know that OpenSCAD is the ideal choice to implement the design. Its object-oriented modeling capabilities would greatly reduce my time drawing the pieces. 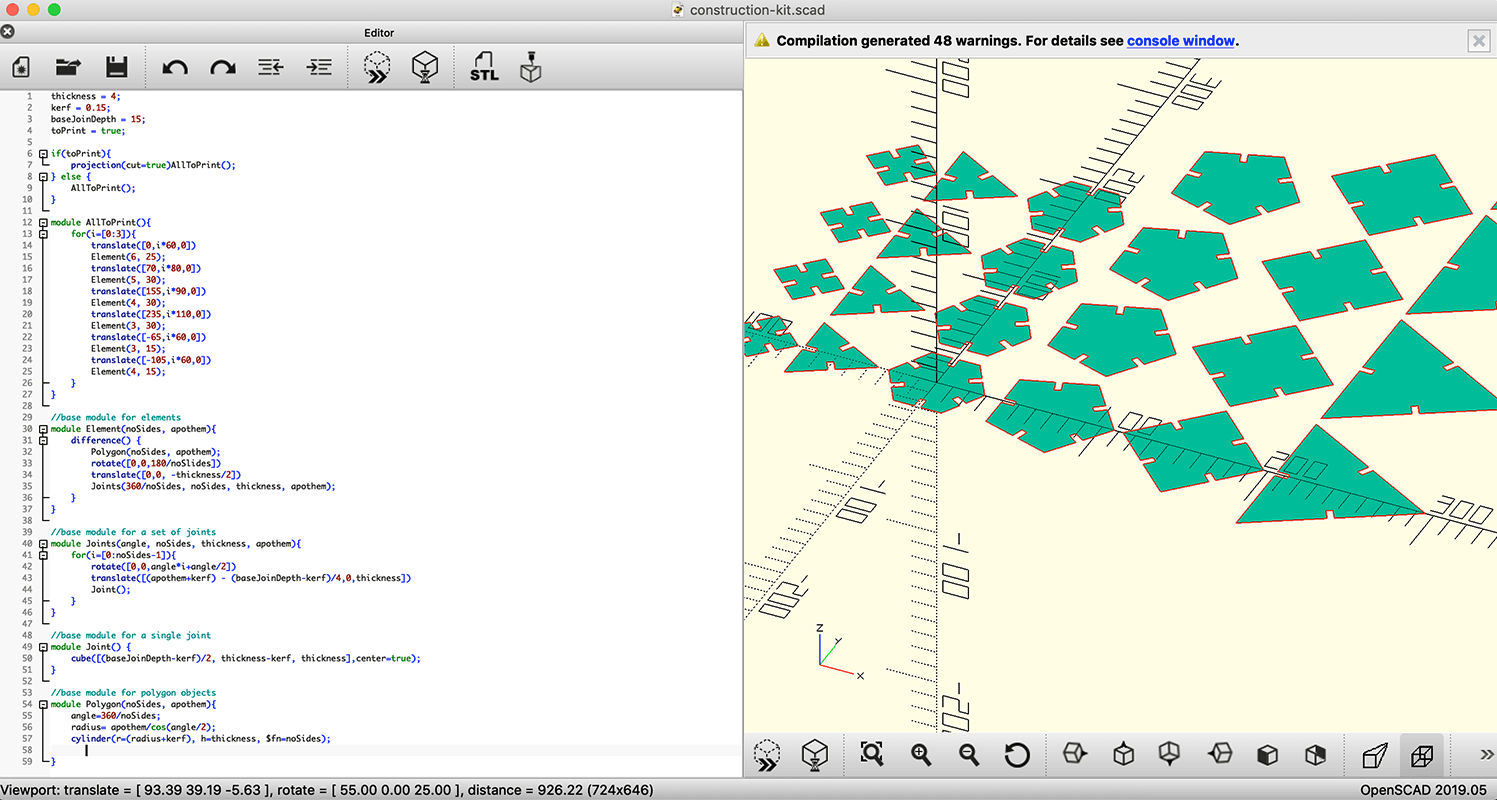 Here you go the detailed steps:

In order to test the kerf width and joint clearance, I directly used the hexagon pieces in my design and proceeded with these following values of kerf width: 0.05mm, 0.1mm, 0.15mm, 0.2mm. NOTE: kerf width=0.15mm means to allow an offset of 0.075mm from each side to make a perfect fit. 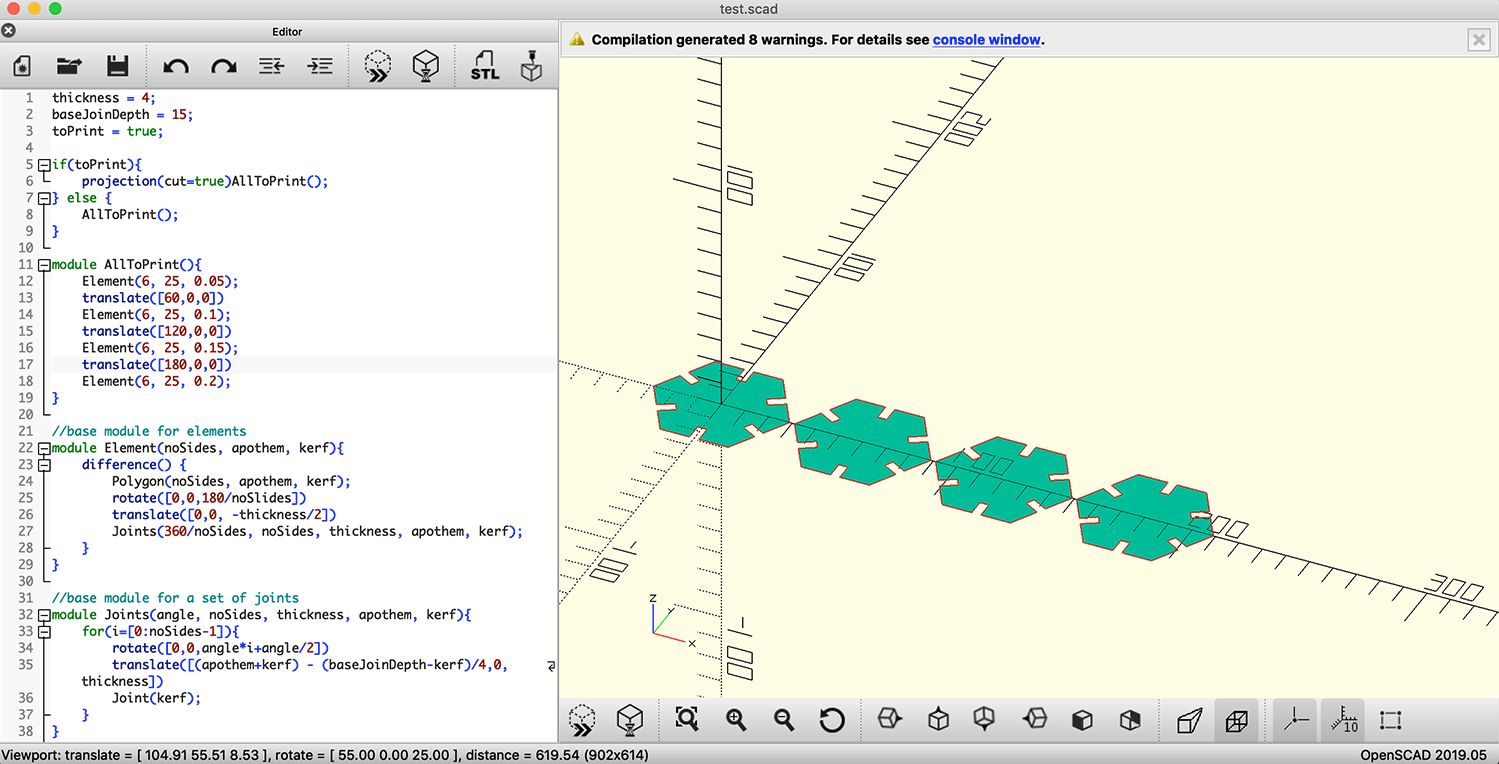 I used the same Trotec Speedy 100 machine used in the group test to cut my pieces. I'm really slow and clumsy when it comes to machines. I kept forgetting the necessary steps, and I had to ask people "Where did he click to do this?" or "Where should I click to do that?" all the time. Big thanks to everyone! 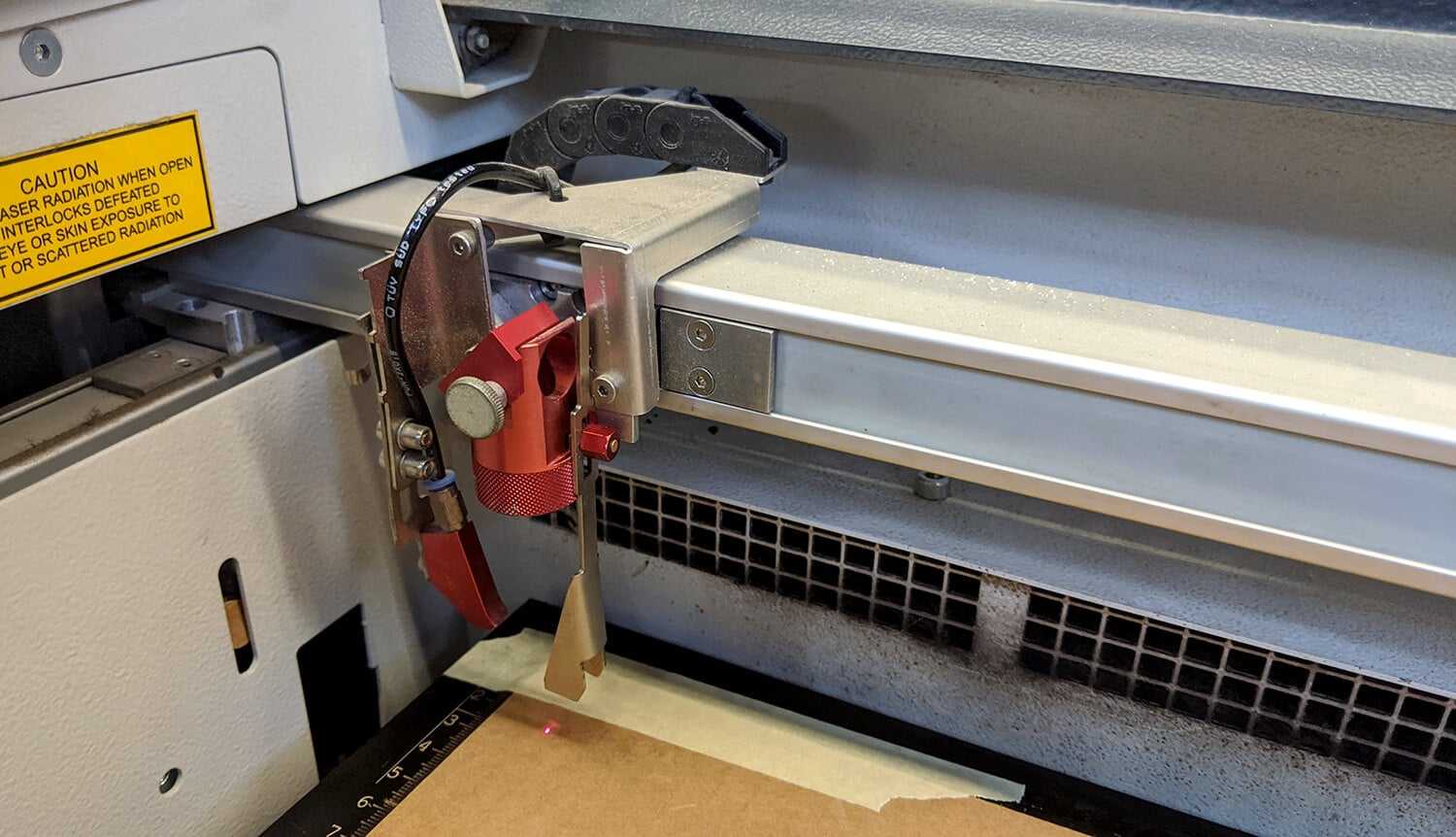 Our instructor Josep Marti guided me through some essential steps:

The cut pieces shown below helped me confirm the kerf width to be used would be 0.15mm in order to assemble 2 pieces securely. The pieces just perfectly joined together without being squeezed or loose. Hence, I modified the parameter in OpenSCAD and continued to cut the rest of my design with that final value. 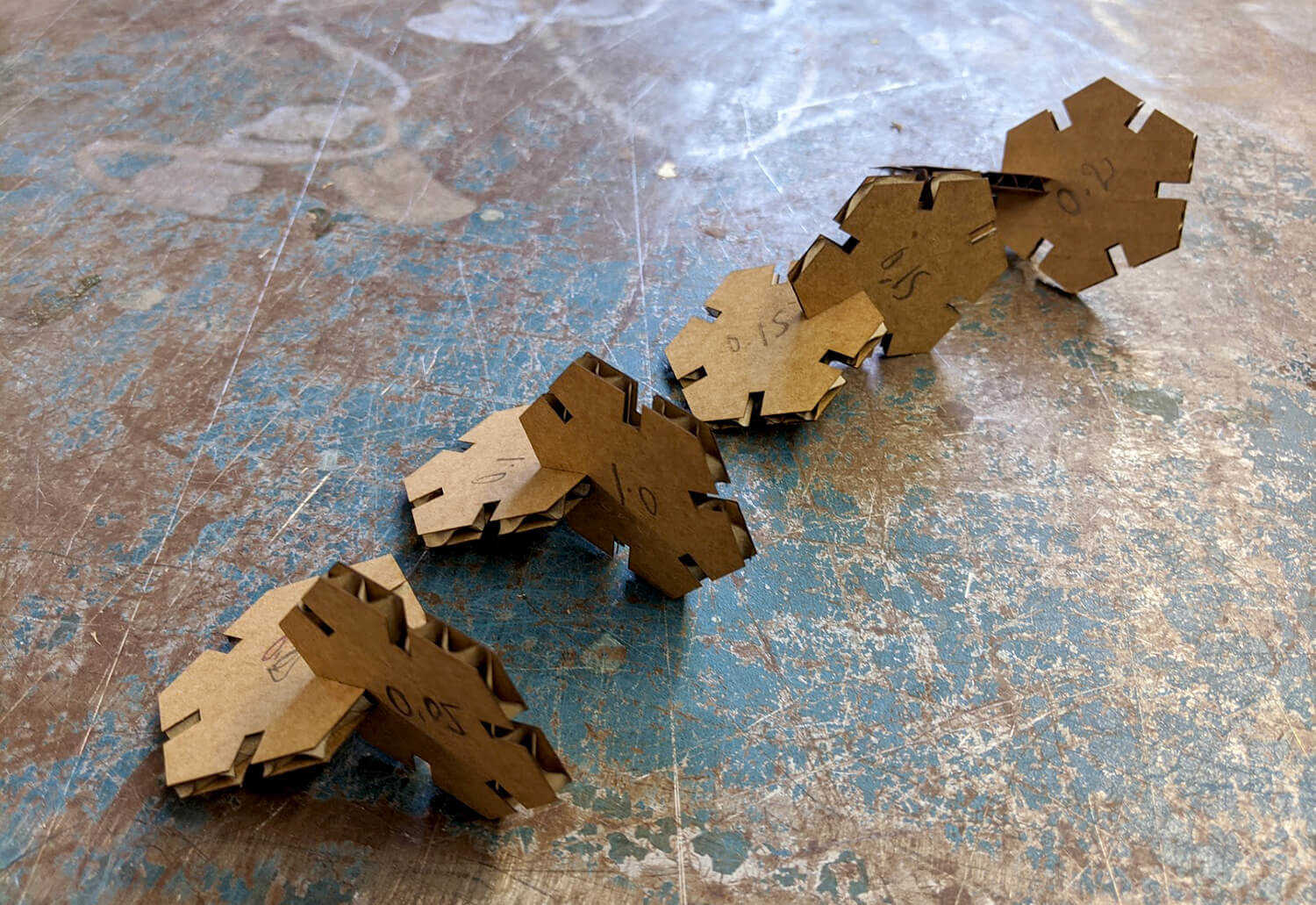 For this final cut of my construction kit, I utilized the leftovers instead of cutting another whole new 600 x 300mm piece. That's why I had to measure the cuttable area and nested the pieces accordingly.

In addition, I noticed that some bigger pieces had not been completely cut through, and I had to use a knife to get them out. I re-cut some big pieces with cardboard, and instead of increasing power, I reduced the speed to 0.8.

Finally, I had the pieces perfectly joined together! 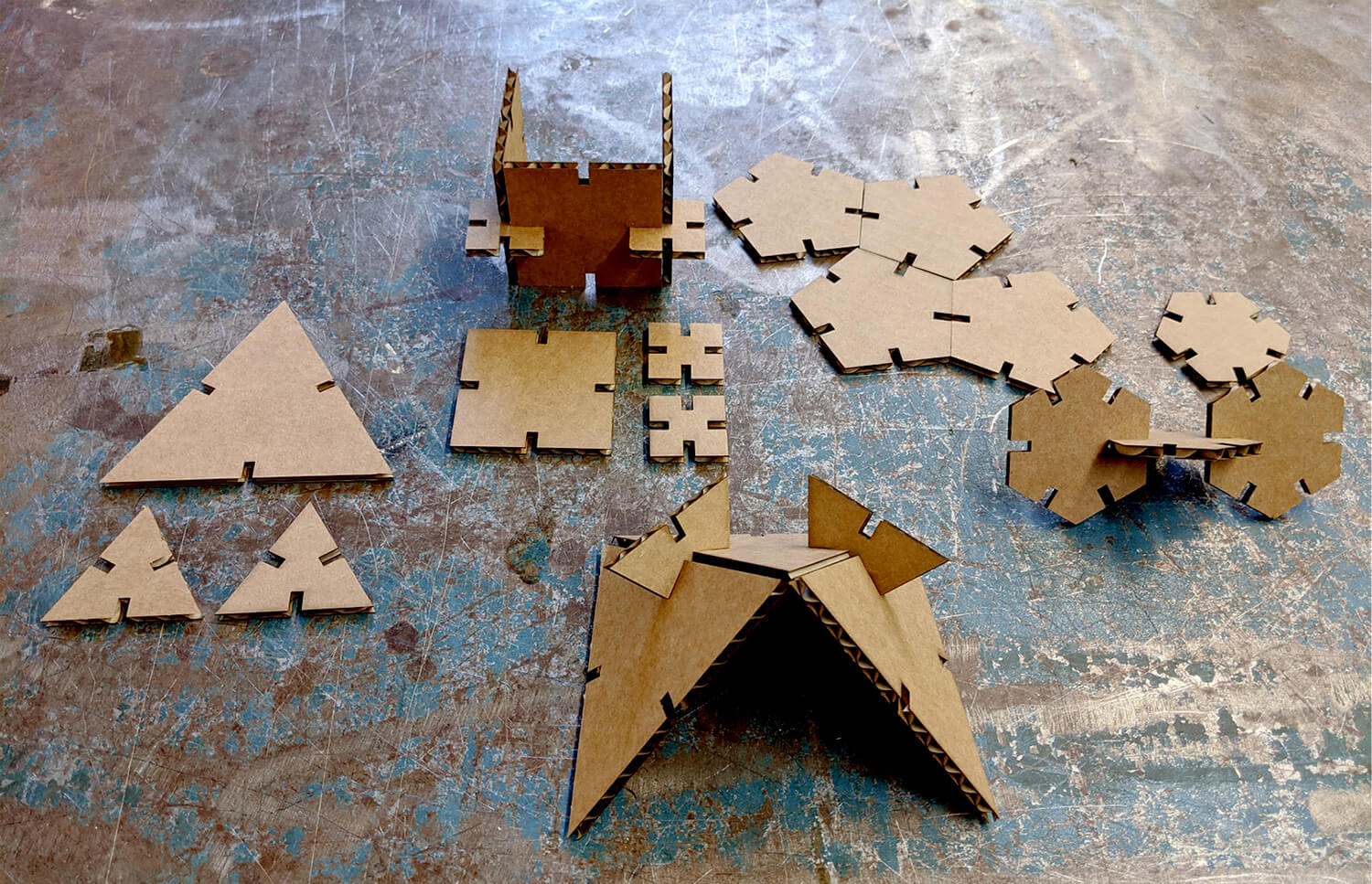 Once I had the laser-cut cardboard pieces in my hands, I tried assembling them randomly. The results were more varied and interesting than I imagined, so I was quite happy with them and I didn't proceed with any further step. 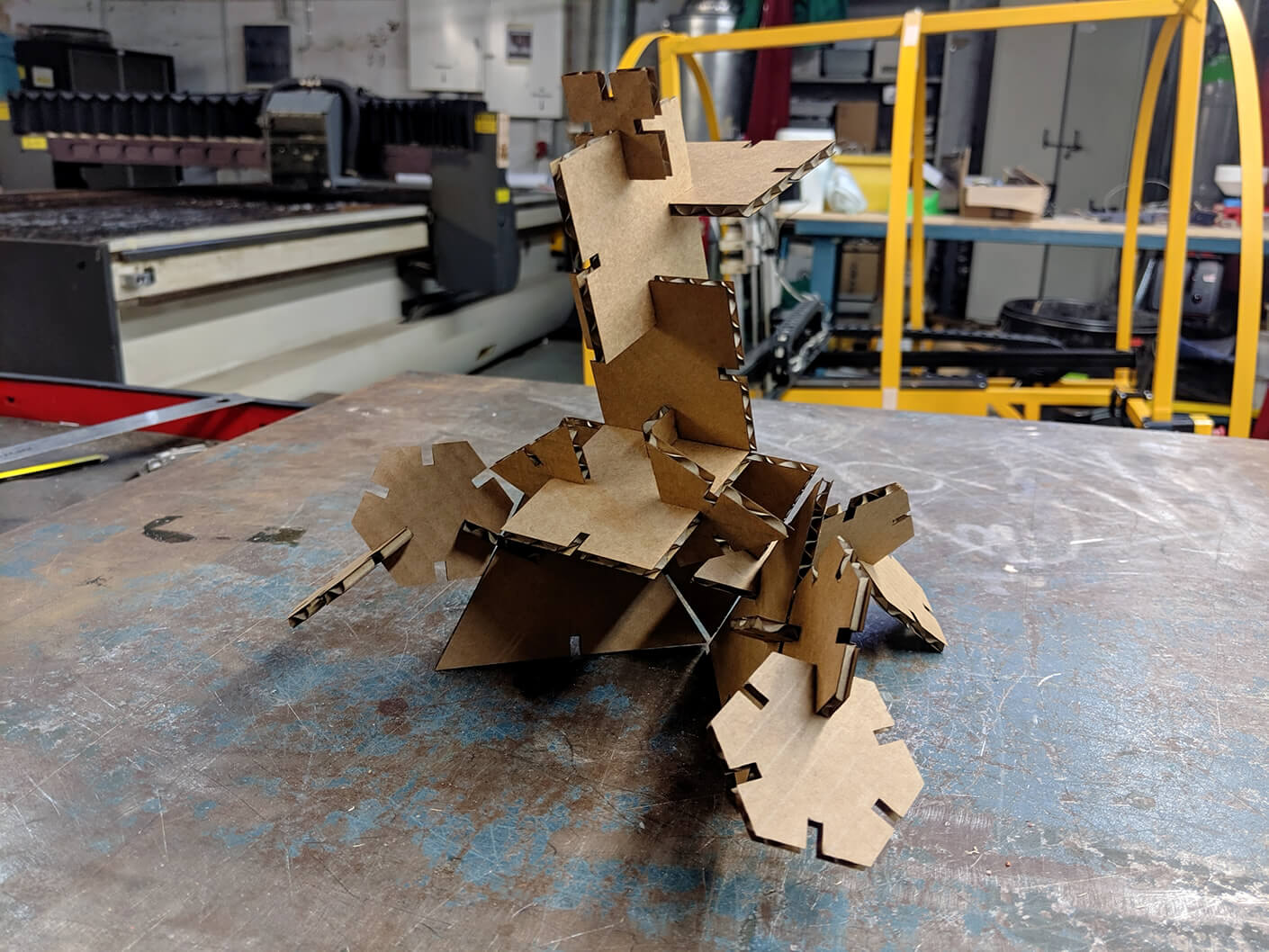 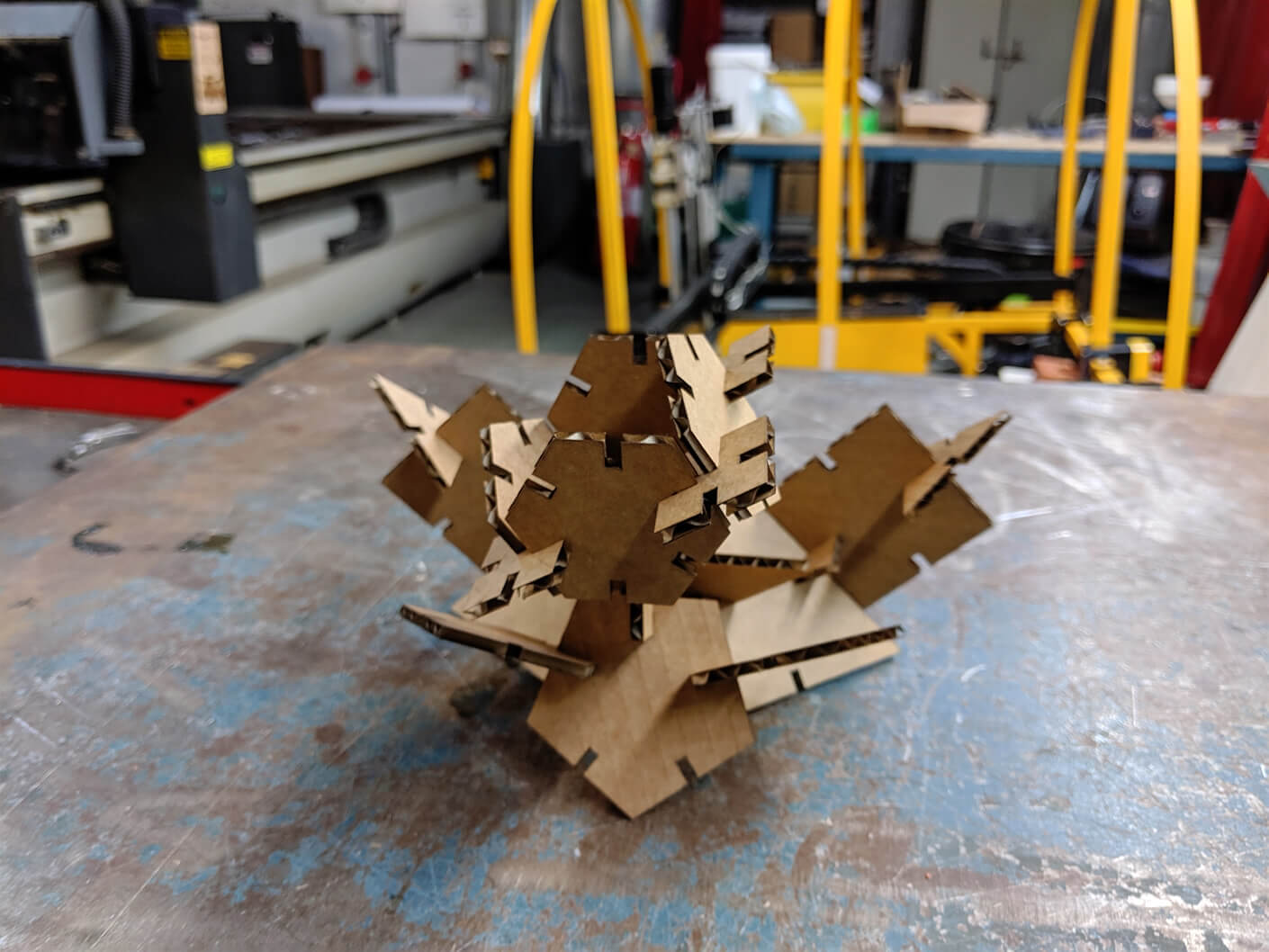 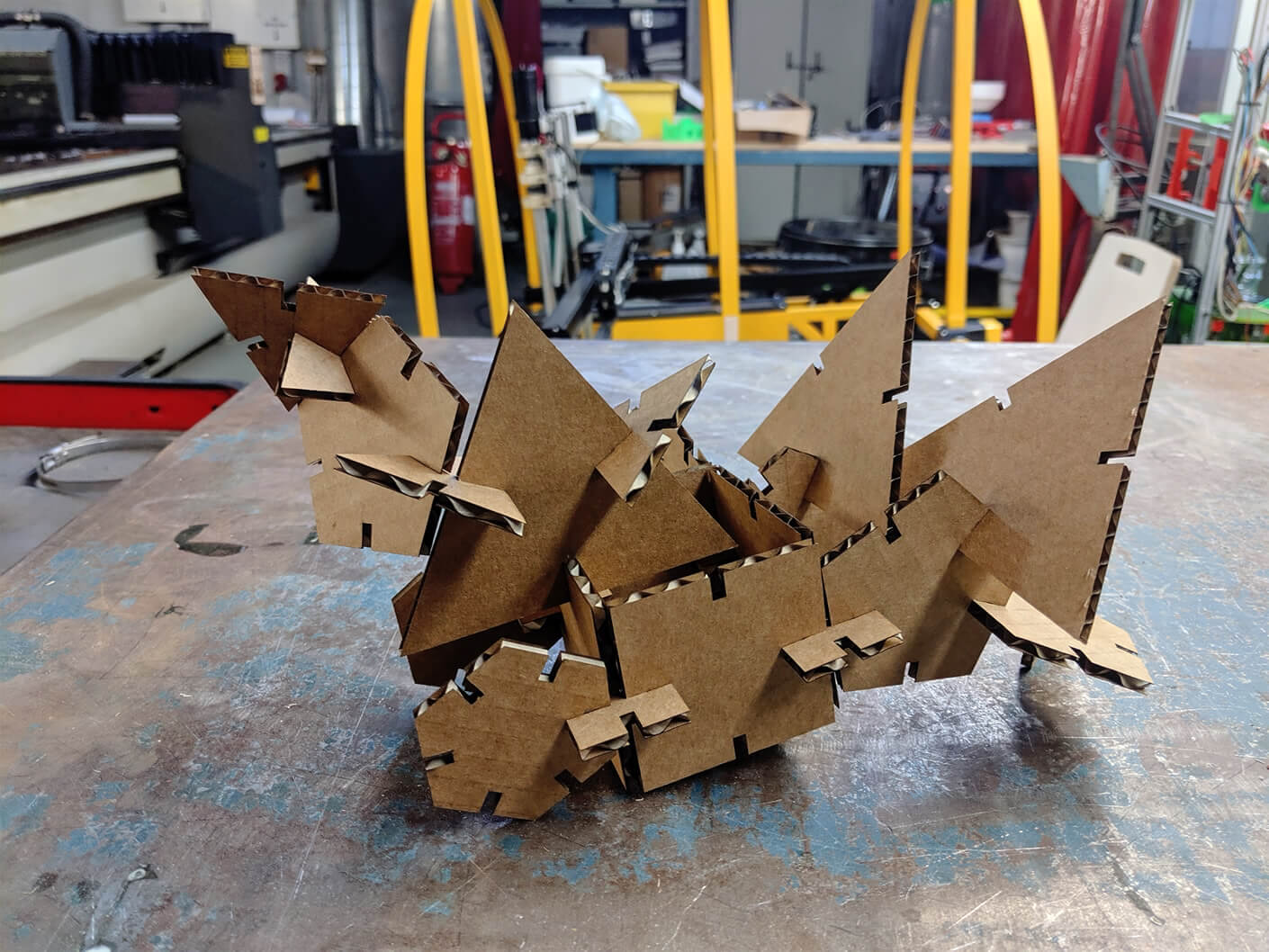 I brought the kit to the landlady where I'm staying. She enjoyed playing with it, and her results were much more impressive. Here we have a resting bird, an angry lobster, a 2-headed monster with wings, and a square-headed scorpio! 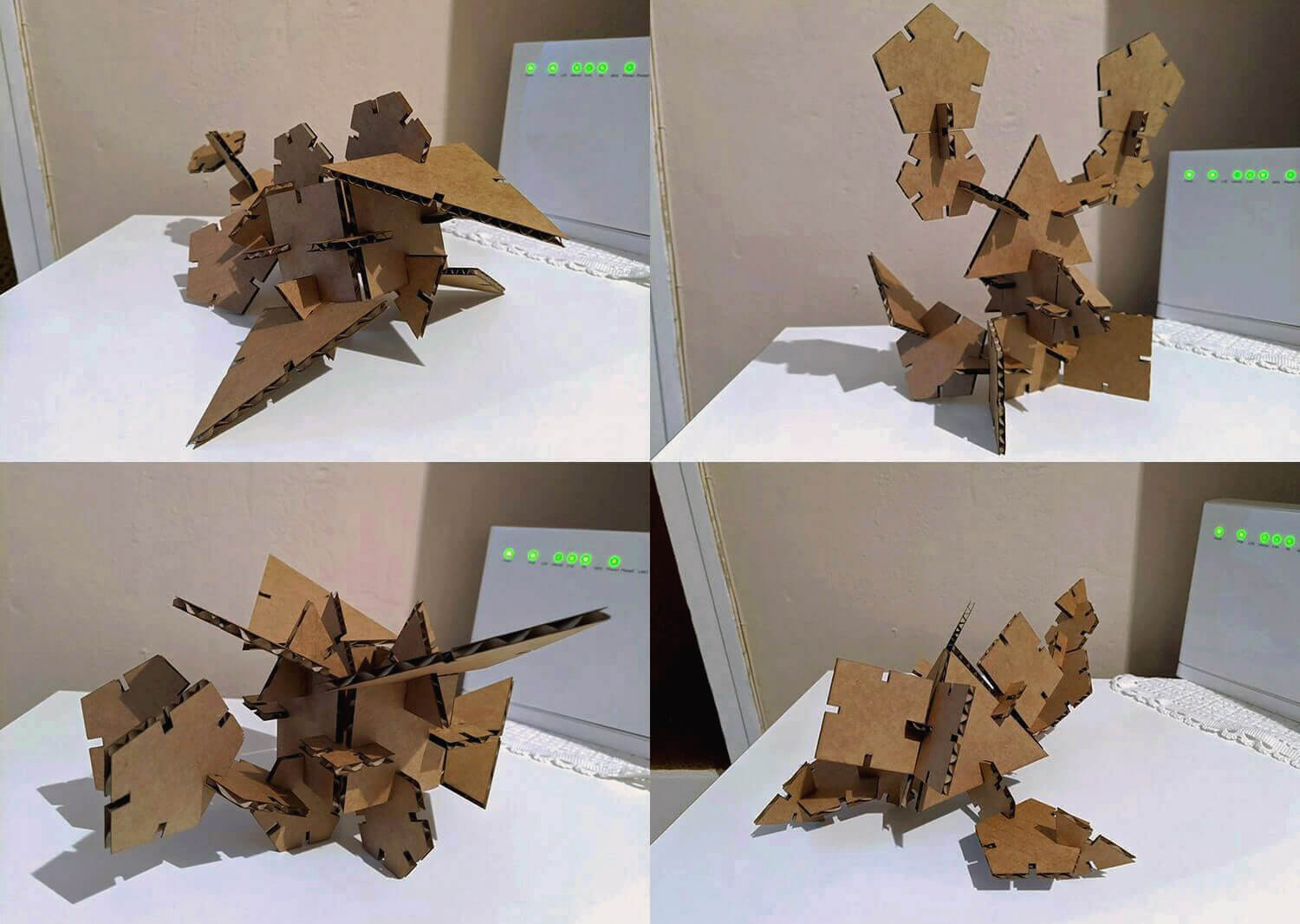 After the regional review, I realized that I didn't proceed with any joint clearance and kerf bending test with other materials rather than cardboard 4mm (which I'm pretty sure I won't use for my Final Project). I also bumped into this article about neater design with living hinges, which is also super tempting. Therefore, I'd like to go a further step by testing the cutting kerf width and the kerf bending capabilities of 2 potential materials for my Final Project: plywood 4mm and acrylic 3mm. I used the same above hexagons to test the kerf width and joint clearance (for acrylic 3mm, I prepared additional hexagons with bigger kerf values: 0.25mm, 0.30mm, 0.35mm and 0.4mm). For testing the kerf bending, I used different living hinge templates which I downloaded from this guy (of course, I modified them a bit). 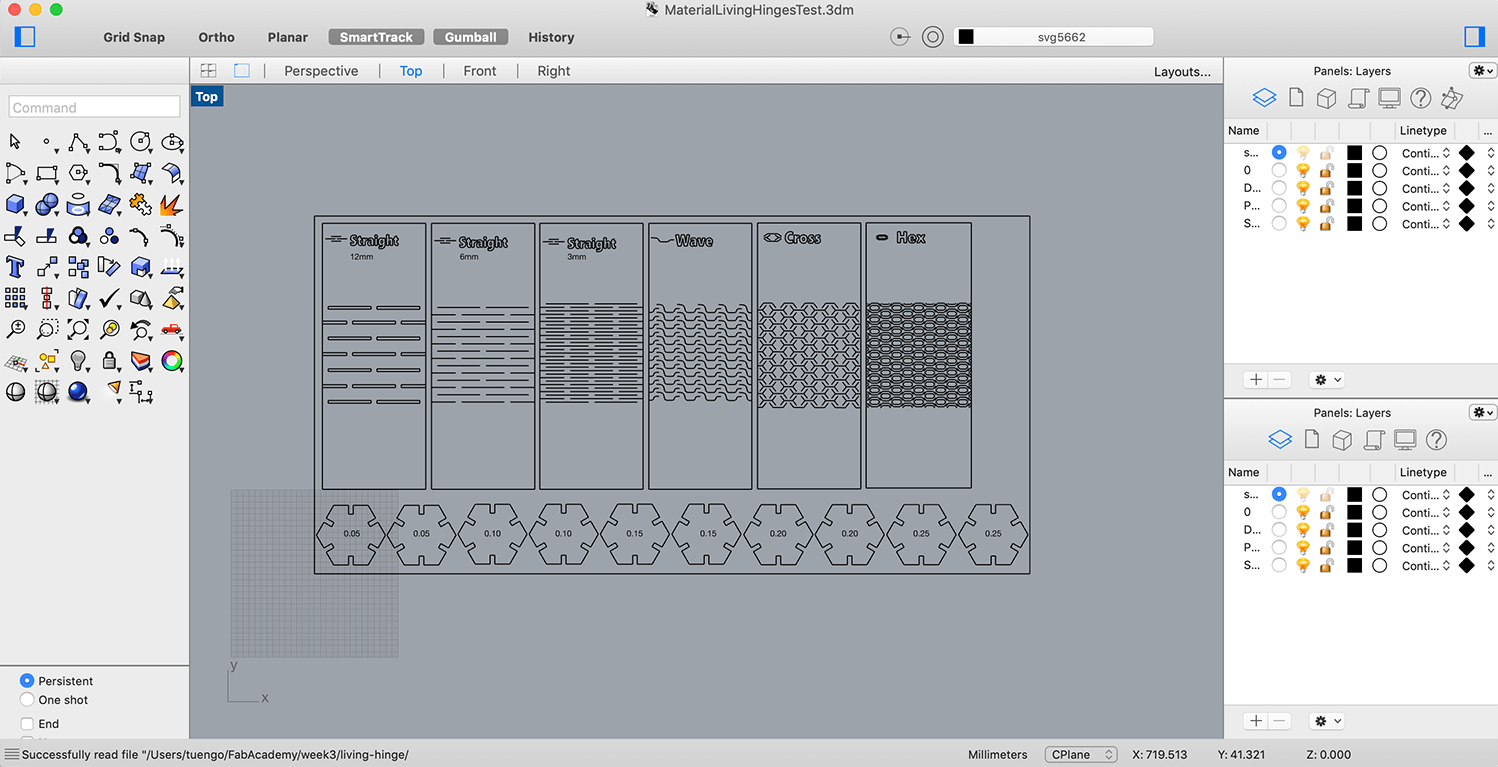 The settings I used for plywood 4mm:

The settings I used for acrylic 3mm:

Final cut pieces came out neat for both machines: 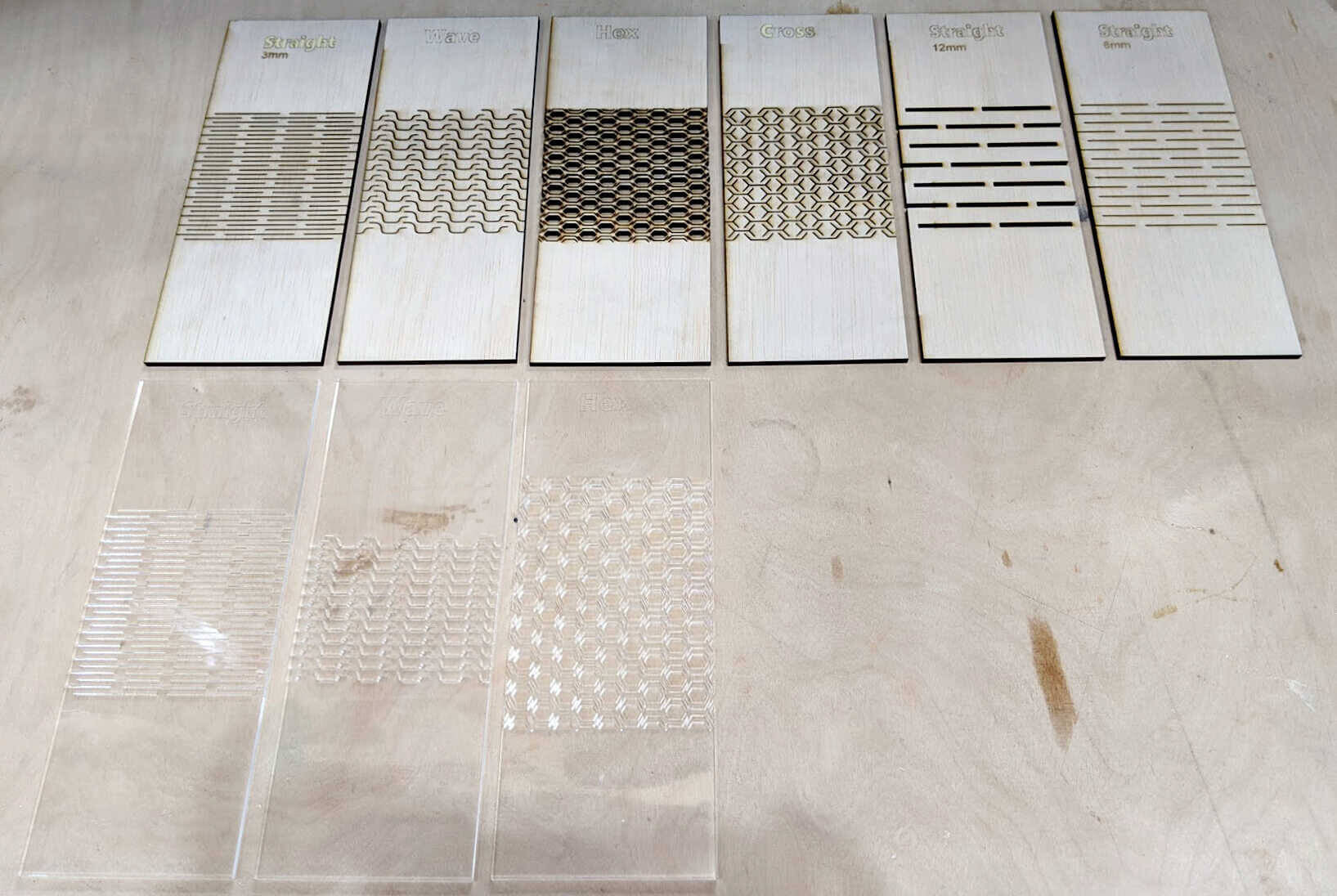 The cut pieces shown below helped me confirm the kerf width of plywood 4mm would be 0.15mm in order to assemble 2 pieces securely.

For acrylic 3mm, the joint of the hexagons with 0.40mm kerf width was still barely loose (which surprised me a lot since I didn't expect such a big kerf). Also, the kerf width of each joint seemed to be inconsistent (I assumed that the laser cutter has different performances at different axes). That's why I used a caliper to measure carefully some dimensions, and after doing some annoying maths, I came to a conclusion that the kerf for acrylic 3mm should be somewhere in between of 0.45mm and 0.5mm. However, in case I will go ahead with acrylic for my Final Project, I might need to test it properly again.

Another thing I noticed after the test was that the surface of the material is also an important factor in making the joint stronger. Cardboard is a soft and flexible material, therefore we can squeeze the parts a bit and they can fit together, and so a slightly tight joint doesn't matter. Plywood is a rigid material, so we need to be a bit more precise. However, the rough surface of plywood can help increase adhesion, which is very helpful in the case of loose joints. For acrylic with a smooth surface, the accuracy of kerf width needs to be increased, since the 2 pieces will slide out very easily if the actual kerf is just slightly bigger than the estimated one.

Some observations for plywood 4mm:

Settings for different materials and processes

That's it, enough testing with laser-cutting. I'm looking forward to other subtractive CAM techniques that will be introduced in the upcoming weeks. In case I will laser-cut some parts of my Final Project, I will try to test whether I can assemble those parts with 3D-printed parts after doing the tolerance test in the 5th week.